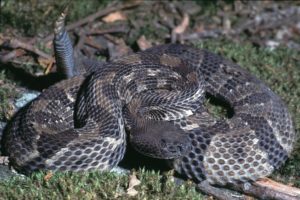 This time around we will talk about the various snakes that you may come across when you stay in one of our North Georgia cabins. While treading through some of more wooded areas of North Georgia, be sure to watch your step. Many snakes are camouflaged and can easily be stepped on. Naturally they will react like their life is in danger and strike at their supposed attacker. Not all snakes are venomous, and most are beneficial to the ecosystem. Generally you are best to steer clear of aggravating them.

The color pattern consists of a pale tan to pinkish tan ground color that becomes darker towards the foreline, overlaid with a series of 10–18 crossbands. They are generally ambush predators: thry take up a promising position and wait for suitable prey to arrive. These snakes prefer to avoid humans and, given the opportunity, will leave the area without biting. However, unlike other vipers they will often “freeze” instead of slithering away, and as a result, many bites occur due to people unknowingly stepping on or near them.

Garter snakes were long thought to be nonvenomous, but discoveries in the early 2000s revealed they do, in fact, produce a neurotoxic venom. Despite this, garter snakes cannot kill humans with the small amounts of comparatively mild venom they produce, and they also lack an effective means of delivering it. They do have enlarged teeth in the back of their mouths, but their gums are significantly larger, and the secretions of their Duvernoy’s gland are only mildly toxic. Their diet consists of almost any creature they are capable of overpowering: slugs, earthworms (nightcrawlers, as red wigglers are toxic to garter snakes), leeches, lizards, amphibians (including frog eggs), minnows, and rodents. When living near water, they will eat other aquatic animals.

This species gets it name from the stark white color of the inside of their mouths which they display to scare off would be attackers. Adults commonly exceed 31 inches in length. The broad head is distinct from the neck, and the snout is blunt in profile with the rim of the top of the head extending forwards slightly further than the mouth. Though the majority of specimens are almost or even totally black, (with the exception of head and facial markings), the color pattern may consist of a brown, gray, tan, yellowish-olive, or blackish ground color, which is overlaid with a series of 10–17 dark brown to almost black crossbands. This species is often confused with the copperhead. The aggressiveness of these snakes has been greatly exaggerated. In tests designed to measure the various behavioral responses by wild specimens to encounters with people, 23 of 45 (51%) tried to escape, while 28 of 36 (78%) resorted to threat displays and other defensive tactics. Only when they were picked up with a mechanical hand were they likely to bite. Its diet includes mammals, birds, amphibians, fish, snakes, small turtles, and small alligators.

When not fully grown, rat snakes are subject to predation by many animals, including other snakes. Once they attain maturity, they are readily preyed on by mammalian carnivores (including the American mink, which weighs no more than an adult rat snake) and large birds of prey (especially red-tailed hawks).When startled, they may freeze and wrinkle themselves into a series of kinks. If they feel further threatened, they may flee quickly or tail vibrate (potentially a form of mimicry, which makes them sound like rattlesnakes). They are also capable of producing a foul-smelling musk, which they will release onto predators if picked up. This species is a constrictor, meaning it suffocates its prey, coiling around small animals and tightening its grip until they can no longer draw breath, before eating them. Though they will often consume mice, voles, and rats, western rat snakes are far from specialists at this kind of prey and will readily consume any small vertebrate they can catch.

Generally, this species is found in deciduous forests in rugged terrain. During the summer, gravid (pregnant) females seem to prefer open, rocky ledges where the temperatures are higher, while males and nongravid females tend to spend more time in cooler, denser woodland with more closed forest canopy. During the winter, timber rattlesnakes brumate in dens, in limestone crevices, often together with copperheads and black rat snakes. Their prey is mainly small mammals, but may include small birds, frogs, and other small animals, including other snakes. Although capable of consuming other rattlesnakes, the most common snake they prey upon are garter snakes. Potentially, this is one of North America’s most dangerous snakes, due to its long fangs, impressive size, and high venom yield. This is to some degree offset by its relatively mild disposition.

Wild corn snakes prefer habitats such as overgrown fields, forest openings, trees, palmetto flatwoods and abandoned or seldom-used buildings and farms, from sea level to as high as 6,000 feet. Typically, these snakes remain on the ground until the age of 4 months old but can ascend trees, cliffs and other elevated surfaces. In colder regions, snakes hibernate during winter. However, in the more temperate climate along the coast they shelter in rock crevices and logs during cold weather, and come out on warm days to soak up the heat of the sun. During cold weather, snakes are less active and therefore hunt less. While most corn snakes will eat small rodents, such as the White-footed Mouse, they may also eat reptiles or amphibians, or climb trees to find unguarded bird eggs.

The Common Kingsnake eats other snakes, including venomous snakes. It has developed a hunting technique to avoid being bitten by clamping down on the jaws of the venomous prey, but even if bitten, it is immune to the venom. It also eats amphibians, turtle eggs, lizards, and small mammals, which it kills by constriction. The preferred habitats are open areas, particularly grassland, but also chaparral, oak woodland, abandoned farms, desert, low mountains, sand, and any type of riparian zone, including swamps, canals and streams. This is certainly one of the more important snake species as it keeps the venomous snake species in check.