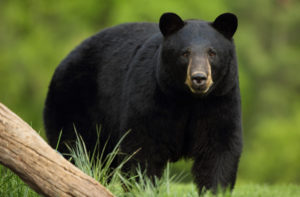 If you are coming to stay in one of our vacation rentals in Helen, Georgia, you could very well come across some wildlife around the property. While visiting, we ask that you respect nature and leave the animals to their own devices. They have the ability to bite, scratch, sting or even maul you. The wildlife can be beautiful, but you must respect their instincts to protect themselves. The next few blog posts will be about the many forms of wildlife that you may see during your stay with us.  Take all the photo’s you like, share them and keep your distance. 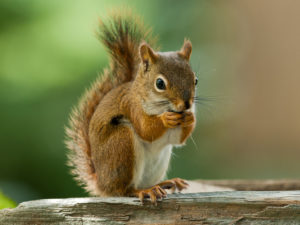 There are plenty of small rodents in the mountains of Georgia. Squirrels, rabbits, hares, rats, mice, chipmunks, and moles just to name a few. They will typically try to avoid people as much as possible, but can be caught in a bad position in a house or cabin. They can be a carriers of diseases and will scratch or bite if threatened. Beaver, skunks and, raccoons are on the larger side. Raccoons may be a nightly visitor as the may attempt to rummage through the trash outside of the cabin.  As cute as the squirrels are, please don’t feed them and lure them closer to the cabin.  Several owners have paid $100’s to seal their home from their invasion.  Unfortunately, they can destroy the wood and wiring in our rafters. Deer can be a beautiful to see during your drive through the mountains. They are very quick, but also very bulky. Be cautious while driving as they can come from out of sight and deal a great amount of damage to your vehicle. There are typically signs in the heavily populated areas for deer crossings. Adult deer in Georgia range from 70 to 250 pounds with bucks typically weighing more than does. Deer are known as generalists because of their ability to thrive in a wide variety of habitats including forests, woodlots, suburbs, golf courses, extensive agriculture, swamps and coastal marshes.  It’s not uncommon to see some beautiful babies before you every see the Mom.

The bobcat is a carnivore and an opportunistic predator. Bobcats mainly hunt rabbits and hares, and are also known to eat rodents, birds, bats and even adult deer. Usually solitary and territorial animals, females never share territory with each other. Male territories, however, tend to overlap. They weigh between 13-30 pounds, stand 21 inches high and are 30-50 inches long. The bobcats in the North tend to be larger than those in the south. Bobcats usually avoid areas of high human disturbance and development and only occasionally cause nuisance problems. They may occasionally prey on smaller livestock such as goats or chickens but overall are not a major nuisance problem. 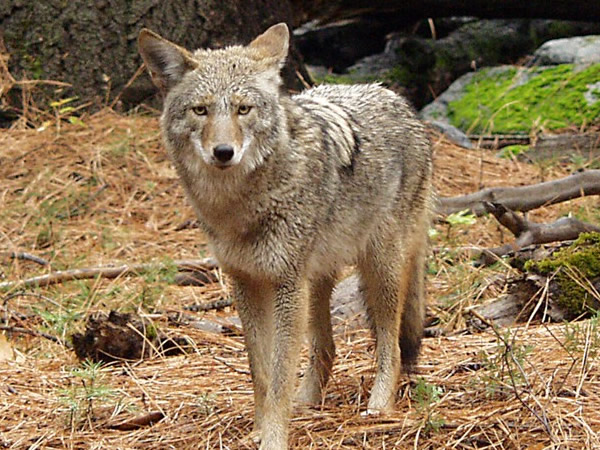 Coyotes in Georgia generally weigh between 25 – 45 lbs. as adults, with an average weight of approximately 30 lbs. They are smaller than wolves but larger than foxes. The high-pitched yipping, yowling and barking of coyotes is a common sound on a summer night in Georgia. The coyotes communicate with each other with the calls, but a train whistle or a low-flying airplane at night may set off a dischordant chorus of “song-dogs.” The word “coyote” comes from the Aztec Indian word coyotl, which also means “barking dog.” Valued as one of the classic representatives from the wild canid family, foxes are found throughout the state in both rural and urban landscapes. In Georgia, there are
two species of fox – the gray fox and the red fox. Because of the adaptability of both gray and red foxes to urban and suburban environments, as well as the abundant food and shelter associated with these areas, foxes are quite common in cities, towns, subdivisions, and even near rural home sites as well as in their natural habitat. Although foxes are primarily nocturnal hunters, it is not uncommon to see a fox during the day. If you see a fox during the day in either the woods or in your yard, the best advice is to simply leave it alone.

The bear that you are most likely to see in North Georgia is the black bear. Bears typically live in forested areas, favoring mature hardwood-pine forests that offer lots of natural food and younger forests providing security and a variety of fruits. Wild bears usually live about 8 to 15 years. Adults may be up to 6 feet in length and about 3 feet high at the shoulder. Adult males can weigh over 500 pounds and may breed at 1.5 years of age. Females can weigh up to 300 pounds, but don’t have cubs until they are 3.5-4.5 years old. Bears have poor eyesight, but an excellent sense of smell. They are good tree climbers, swim well and can run as fast as 30 miles per hour.Bears are omnivorous, meaning they eat a variety of foods depending on what is available locally at a given time of year. Their natural diet consists mostly of berries, fruits, acorns, grasses, and animal matter, including insects or mammals—even deer. Bears are naturally attracted to food smells like cooking and garbage. There are no recorded bear attacks on humans in Georgia, and no fatalities.  An interesting is that the Bear population in Georgia is recorded at 2200, but in Florida it is recorded at 4000!

Come, stay and enjoy everything that nature has to offer in this fantastic region.  Always be respectful and cautious of the wildlife and teach your children the same.