Oktoberfest is the world’s largest Volksfest (beer festival and travelling funfair). Held annually in Munich, Bavaria, Germany, it is a 16- to 18-day folk festival running from mid or late September to the first weekend in October, with more than six million people from around the world attending the event every year. The Oktoberfest is an important part of Bavarian culture, having been held since the year 1810. Other cities across the world also hold Oktoberfest celebrations that are modeled after the original Munich event. During the event, large quantities of Oktoberfest Beer are consumed: during the 16-day festival in 2013, for example, 7.7 million liters (66,000 US bbl) were served. Visitors also enjoy numerous attractions, such as amusement rides, sidestalls, and games. There is also a wide variety of traditional foods available.

Kronprinz Ludwig (1786–1868), later King Ludwig I (reign: 1825–1848), married Princess Therese of Saxe-Hildburghausen on 12 October 1810. The citizens of Munich were invited to attend the festivities held on the fields in front of the city gates to celebrate the royal event. The fields were named Theresienwiese (“Theresa’s Meadow”) in honor of the Crown Princess, and have kept that name ever since, although the locals have since abbreviated the name simply to the “Wiesn”. Horse races, in the tradition of the 15th-century Scharlachrennen (Scarlet Race at Karlstor), were held on 18 October to honor the newlyweds. It is widely understood that Andreas Michael Dall’Armi, a Major in the National Guard, proposed the idea. However, the origins of the horse races, and Oktoberfest itself, may have stemmed from proposals offered by Franz Baumgartner, a coachman and Sergeant in the National Guard. The precise origins of the festival and horse races remain a matter of controversy, however, the decision to repeat the horse races, spectacle, and celebrations in 1811 launched what is now the annual Oktoberfest tradition.

In 1811, a show was added to promote Bavarian agriculture. In 1813, the festival was canceled due to the involvement of Bavaria in the Napoleonic Wars, after which the Oktoberfest grew from year to year. The horse races were accompanied by tree climbing, bowling alleys, and swings and other attractions. In 1818, carnival booths appeared; the main prizes awarded were of silver, porcelain, and jewelry. The city fathers assumed responsibility for festival management in 1819, and it was decided that Oktoberfest become an annual event. Later, it was lengthened and the date pushed forward because days are longer and warmer at the end of September. The horse race continued until 1960, and the agricultural show still exists today and is held every four years in the southern part of the festival grounds.

To honour the marriage of Prince Ludwig and Therese of Saxe-Hildburghausen, a parade took place for the first time in 1810. Since 1850, the parade has become an annual event and an important component of the Oktoberfest. Eight thousand people—mostly from Bavaria—and dressed in traditional costumes walk from Maximilian Street through the centre of Munich to the Oktoberfest grounds.

Since then Oktoberfest kept growing and evolving to what it is today. 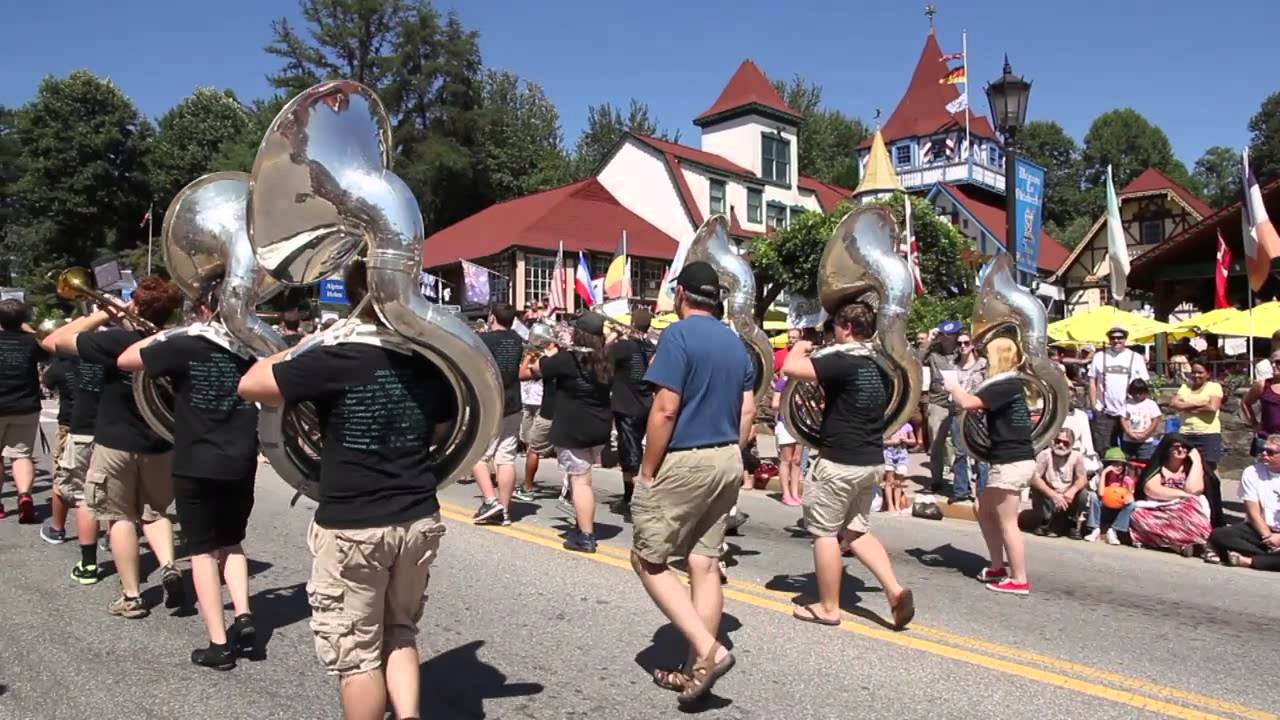 The first Helen Oktoberfest was a limited success, but within five years the party had caught on and the streets of Helen were filled with visitors. Helen expanded the party to six weeks, including the popular leaf-change season. Hotels fill up, so it is important to book a hotel early. We have included links for on-line reservations at the city’s best hotels.

Although the entire town participates in the Oktoberfest, Oompah-central is the Festhalle, where the bands play throughout the day. It is here that cold beer and hot off the grill German-style wursts (sausages) are served. A parade, normally on the first Saturday of the festival, kicks off the celebration. When we came for the parade in 2001 (shortly after September 11) it was truly memorable as those who could find an American flag waved it during the celebration.

For an event schedule for Oktoberfest, visit https://www.exploregeorgia.org/helen/events/culinary-food-wine-beer/48th-annual-oktoberfest