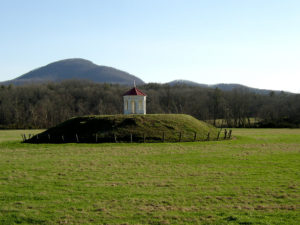 The Indian Burial Mound in Sautee Nacoochee is one of the more noticeable attractions of the area. Here is a bit of the history.

In the 1870s, the mound site was owned by Captain John H. Nichols, who reported plowing up Mississippian culture stone box graves to the west of the mound. The mound in 1873 was described as being 16 feet (4.9 m) in height, in a report on Native American sites in Georgia, written by Charles C. Jones. In 1890 Captain Nichols removed the top 2 feet (0.61 m) of the mound and built a locally famous gazebo on its new summit.

The mound was formally excavated in 1915 by a team of archaeologists headed by Frederick Webb Hodge and George H. Pepper and sponsored by the Heye Foundation and the Bureau of American Ethnology (now part of the Smithsonian Institution). George Gustav Heye wrote a book with Hodge and Pepper about the excavation, The Nacoochee Mound in Georgia (1918). The excavation uncovered 75 human burials, including 56 adults, seven adolescents, and four children, and eight bodies that were too degraded for their ages to be determined.

The burials were layered, dating from different time periods. About a third of the individuals were buried with artifacts indicative of social status, including hammered copper and stone celts, conch shell beads and cups, and elaborate Mississippian culture pottery. Some later burials included glass beads and sheet brass ornaments, indicating that these were intrusive burials of 17th-century Europeans.

Archaeological evidence suggests that Nacoochee Mound site, and a nearby mound site called the Eastwood Site (9Wh2), served as local administrative centers in the late 15th century and early 16th centuries. A bronze historical marker at the site claims it is the “ancient Cherokee town of Gauxule, visited by Hernando de Soto in 1540.” Little to no evidence of Cherokee occupation was found during the 2004 test excavations, and it is doubtful that they ever inhabited the site.

The original Nacoochee Mound was partially excavated. A reconstruction of this mound was built and survives on the estate of former Georgia governor Lamartine Griffin Hardman, in the Nacoochee Valley in White County, two miles south of Helen.