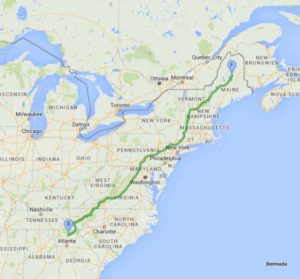 While staying in one of our Helen, Georgia cabins, you may want to take a trip and visit the Appalachian trail. If you are interested, here are a few things about the trail that may interest you.

The trail is about 2,200 miles (3,500 km) long, though the exact length changes over time as parts are modified or rerouted. The Appalachian Trail Conservancy claims that the Appalachian Trail is the longest hiking-only trail in the world. More than 2 million people are said to do at least one day-hike on the trail each year.

The idea of the Appalachian Trail (AT) came about in 1921. The trail itself was completed in 1937 after more than a decade of work, although improvements and changes continue.

The trail was conceived in 1921 by a forester by the name of Benton MacKaye. On October 7, 1923, the first section of the trail, from Bear Mountain west through Harriman State Park to Arden, New York, was opened. A retired judge named Arthur Perkins and his younger associate Myron Avery took up the cause. In 1929, Perkins, who was also a member of the Connecticut Forest and Park Association and its Blue Blazed Trails committee, found Ned Anderson, a farmer in Sherman, Connecticut, who took on the task of mapping and blazing the Connecticut leg of the trail (1929–1933). It ran from Dog Tail Corners in Webatuck, New York, which borders Kent, Connecticut, at Ashley Falls, 50 miles (80 km) through the northwest corner of the state, up to Bear Mountain at the Massachusetts border. Anderson’s efforts helped spark renewed interest in the trail, and Avery (who led the charge after Perkins’ death in 1932) was able to bring other states on board. Upon taking over the ATC, Avery adopted the more practical goal of building a simple hiking trail.  In August 1937, the trail was completed to Sugarloaf Mountain in Maine, and the ATC (Appalachian Trail Conference or Appalachian Trail Conservancy) shifted its focus toward protecting the trail lands and mapping the trail for hikers.

Georgia has 75 miles (121 km) of the trail, including the southern terminus at Springer Mountain at an elevation of 3,782 feet (1,153 m). At 4,461 feet (1,360 m), Blood Mountain is the highest point on the trail in Georgia. The AT and approach trail, along with many miles of blue blazed side trails, are managed and maintained by the Georgia Appalachian Trail Club.

We hope that you will consider visiting one of our cabin rentals during your next visit to Helen, Georgia.