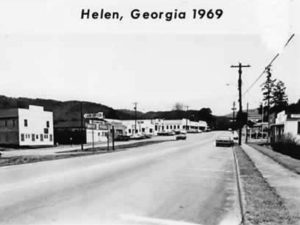 This 1969 photograph shows how Main Street (Ga. 75) through downtown Helen looked when artist John Kollock was commissioned by local businessmen to help them find a way to revive the town.

A volunteer committee is ramping up its preparations for two big anniversary observances coming to Helen over the next two years.

Most people know Helen features an Alpine motif and an annual Oktoberfest celebration, but many don’t know how that came to be.

By the 1960s, Helen had become a dormant former lumber town that didn’t have a lot to offer those headed deeper into the North Georgia mountains.

In January 1969, Helen businessmen Jim Wilkins, Pete Hodkinson and Bob Fowler met at a local restaurant and discussed the idea of what could be done to refurbish the town to entice tourists to stop.

Hodkinson contacted artist John Kollock of Clarkesville, a church acquaintance whose family had been in the area for years.

During his time in the U.S. Army, Kollock had been stationed in Germany, so he knew almost immediately the type sketches he would prepare for his proposal.

“The thing that drove me initially is because I thought the idea would work,” Kollock told a gathering during the town’s centennial year of incorporation. “When a town takes a purpose and takes a theme and works for it, it will work. This town did that and it has worked.”

Kollock’s passion for the design of that Alpine/Bavarian concept and Hodkinson’s passion for convincing property owners, businesses and residents to buy into the theme are what made the Alpine Helen that today draws tourists from across Georgia, the United States and the world.

“With what Helen had done in 1969, making it an Alpine/Bavarian village, we have become the third most-visited area in the state of Georgia, behind Atlanta and Savannah, so it’s very important to keep that information out there to let folks know all the great things you can do here, not only in Helen but the surrounding area,” Brown said.

Brown and committee members still are finalizing a logo and planning to incorporate the anniversaries into annual events, as well as adding other activities.

“We’re really looking forward to it with a lot of events,” Brown told AccessWDUN at the conclusion of Wednesday’s meeting. “The state is also involved in helping us promote this throughout the state, and hopefully even outside the state.”

Last week, Helen leaders learned the city has been named one of the Reader’s Digest Most Charming Small Towns.

“It named us as one of the top towns in the United States to visit,” Brown said. “As you remember, last year we got that notoriety as well for us being one of the top Christmas towns, not only in Georgia but in all of the United States. Now, with that recognition, it helps tremendously with letting folks know about Helen and the great things that we have available.”

Brown is quick to remind people that Helen is totally open for business and welcoming visitors, despite a 50-year flood that caused problems over a couple of days earlier in the summer.

Brown encourages anyone who would like to be involved in planning the anniversary events to contact the Alpine Helen/White County Convention & Visitors Bureau at (706) 878-2181.

“It would be great for them to be involved,” Brown said. “We are looking for anyone that was involved when the town was converted into an Alpine village, to have them a part of all of our celebrations — especially the big celebration that we’ll be doing at the Helen Arts and Heritage Center in August of next year.”